In the previous tutorial, Rendering Earth in Godot 3.4, I showed how to make a simple Earth model in Blender and import it to Godot. In this post, we’ll explore how to rotate the globe, thus making our “game” interactive. 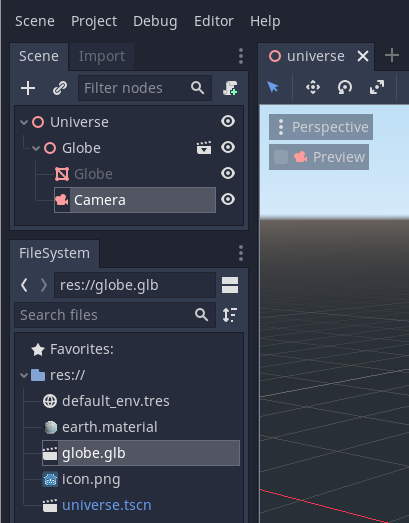 Now to add some interaction! For simplicity, we’ll keep the globe fixed at the world origin, and instead move our camera around. This will make calculations easier for now.

First, let’s add an “Area” to our “Globe” spatial. This will allow us to listen on mouse click events. Right-click the “Globe” spatial in the node tree and select Add Child Node (Ctrl+A). Locate the “Area” class: 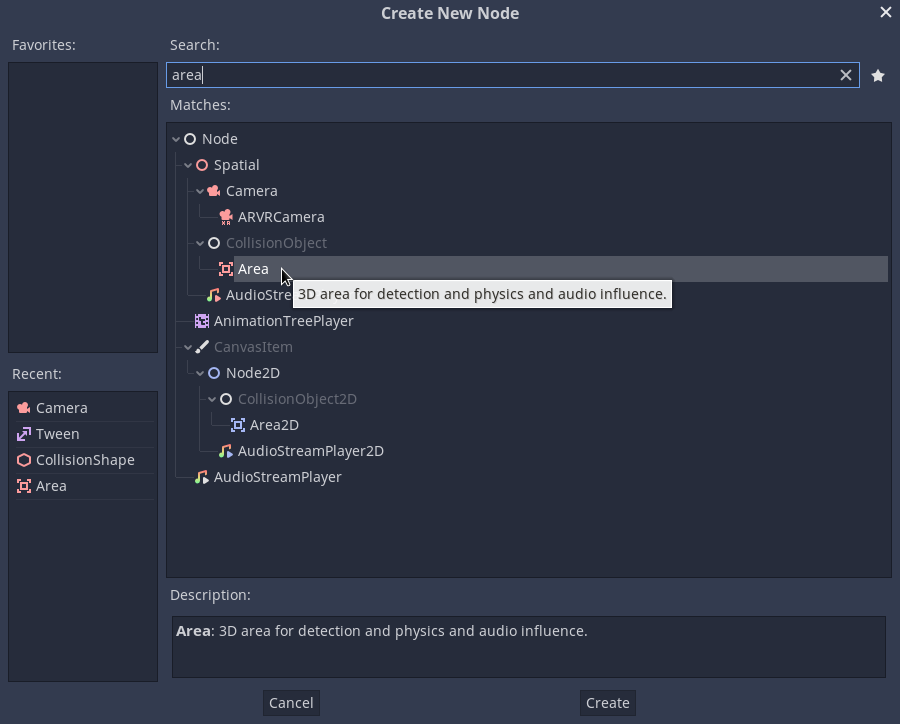 Once we add the Area, we’ll immediately get a node configuration warning, telling us that the node has no shape and thus it can’t interact with other objects. Let’s fix that by adding a shape: add a new “CollisionShape” object as a child node of the Area, the same way we added the Area node.

Select New SphereShape to create a sphere-shaped collision object. Leave the radius at 1 unit, since that is the radius of our globe.

Now that we have a collision shape, we’ll want to connect its input signal to a script where we’ll handle it by transforming the camera. To do that, let’s create a script first by selecting the Camera node in the node tree and pressing the “Attach Script” icon, or selecting Attach Script from the context menu.

Leave the defaults, except rename the script file to camera.gd, because, naming conventions. 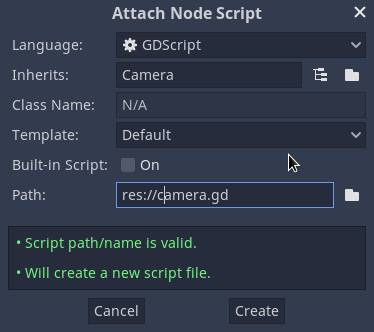 Now select the Area node, and go to the Node panel, which is the tab right next to the Inspector panel on the right. Under Signals » CollisionObject, double-click the input_event(…) signal. Click Connect to connect it to the Camera node.

Once we connect the signal to the Camera node, we’ll get an empty function in the script that is called every time an input event occurs on the collision object. In this function, we have a reference to our Camera node (the camera parameter) and the position on the sphere where the mouse click happened (the position vector).

We can easily re-orient the camera by calling the look_at_from_position(…) method of the camera, which takes three arguments: the new position to move the camera to, the position to look at, and the “up” orientation.

The new camera position can be obtained by scaling the position vector to the length of the vector specifying the camera origin:

Note that we use position.normalized() to re-scale the position to a unit vector. This wouldn’t be necessary if our collision object was a perfect sphere, but it isn’t: like everything in our 3D game, it is secretly a collection of triangles. To avoid small changes in the camera distance, we normalise the position vector, which really just means we’re interested in the orientation, but not length of the vector.

Now all that’s left is to call camera.look_at_from_position(…). We want to keep looking at the globe, so we’ll pass the world origin Vector3.ZERO as the second argument. To keep the camera orientation so that north is always up and south is down, we pass Vector3.UP as the third argument.

Now we can hit F5 to test our game. Let’s try to cli… Oh no! What’s happening? The Earth is going nuts!

OK, time to calm down, this is progress. The crazy camera movement is because all mouse movement is treated as input events, not just the clicks. To ignore events other than left mouse-click, we can add an if guard:

Re-run the game with F5 and now we can click around the globe, looking at it from various positions.

We can now look at the globe from all directions, but wouldn’t it be even nicer if we could animate the camera movement, instead of jumping to the new position immediately? Luckily Godot provides a simple helper to do such animations: the Tween node.

Go ahead and add one to the Camera node. We’ll call it tween and access it via a property in our Camera script:

To use the script, we’ll replace the camera.look_at_from_position(…) call with a call to tween.interpolate_method(…). Note that we cannot easily use interpolate_property(…) here because we want to change not just the position, but also the rotation of the camera transform, while the Tween class only knows how to interpolate vectors.

First we move our camera transform code to its own method:

Note that we’re accessing look_at_from_position(…) directly, without using a reference to the Camera node. This is possible because our class extends the Camera class, so we can implicitly access its members, just like in Ruby or C++ (but unlike in Python, where an explicit self.look_at_position(…) would be needed). This works because we attached our script to the Camera node.

Now, change the event handling code to use the tween object:

The arguments here are:

Now if we press F5 again, we’ll see that now the camera moves nicely, but there are still a couple of issues:

The problems are due to the fact that the interpolated positions are along the closest line from the two endpoints. What we want instead is to keep the camera at a constant distance from the globe.

An easy way to fix that is to interpolate between two unit vectors, and using the result only as an orientation, re-scaling the result each time to keep the distance. Let’s change the input handling code again.

In fact, let’s move all that business out to yet another function, to keep the handler code simple and clean. At the same time, we’ll change the tween parameters to interpolate between two unit vectors, and change the look_from method to treat its input as an orientation, not a position vector.

F5 again, and yay! We now have a much smoother camera movement, that goes around the globe. It is also no longer possible to clip into the globe by clicking too quickly.

Let’s look at how Google Maps solves this issue. When we rotate the globe, it seems to animate the latitude and longitude in a way that we don’t actually fly by the poles. We should do this in our game as well, but interpolating two values gets more complicated. Ideally, we’d just use the interpolated orientation vector we already have, but then instead of scaling it up to the current camera distance, we’d first “normalise” it in a way where we only scale up the X and Z components. The Y (“up”) component should stay the same, so we don’t get closer to the poles than the two endpoints of the interpolated vectors.

To do that, we can imagine shearing our vector “outwards”, away from the Y axis, until the point ends up on the unit sphere (i.e. we end up with a unit vector). If \((x, y, z)\) is the current interpolated vector, and \((x_1, y_1, z_1)\) is the unit vector we’re trying to calculate at each frame, we can observe the following relations:

We can extract for example \(z_1\) from that second equation, and use it to extract \(x_1\) from the third equation. The result is:

Note that in the solution above the sign of \(x_1\) (and consequently the sign of \(z_1\) can be positive or negative, but for our camera motion we want to keep the sign of all coordinates the same. The simplest way to do that in GDScript is using the sign built-in.

Putting it all together, this is how the script file looks like:

Hit F5 one last time, and finally! We’ve got some nice, smooth camera movement that doesn’t go wonkers near the North and South pole.

I hope this tutorial was a nice example of how even some basic algebra can come in handy when doing game development. A future post will go into more detail about field of view, focal length and other camera settings, so stay tuned.